Gay Men Are Embracing Naked Yoga All Over the World 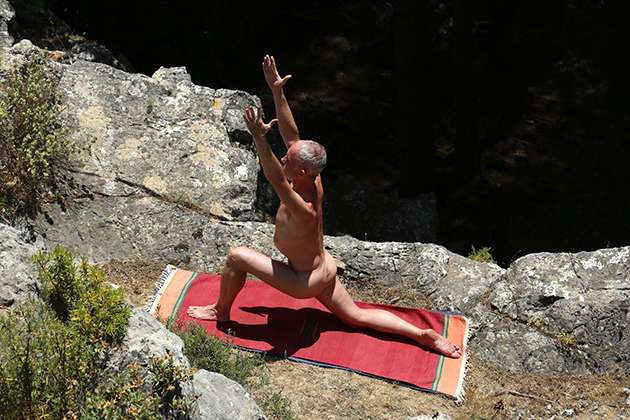 It’s not about sex. So why are men prepared to risk prison or even corporal punishment to hang out naked?

Slack-jawed and briefly speechless, men would occasionally be a bit shocked when I told them I was a naked yoga teacher.

Then their imagination would kick in and they’d have a barrage of questions for me… or, in a small number of cases, they would clamp their teeth together and change the subject.

After almost a decade of leading classes for men, though, my profession is no longer the sensation it once was. Naked yoga has made its way into most people’s consciousness and taken on the world.

Of course, naked yoga is not exclusively a gay and bi men’s thing. While most of the men who come to my classes, and those of the teachers I know and have interviewed, would say they’re same-sex attracted, there are often a few straight guys. Sexuality doesn’t matter.

Nor is it just a male thing. Teachers are also establishing co-ed and classes for women.

However, gay and bi men are certainly at the forefront of its growing popularity.

Five years or so ago there were only a handful of cities where nude classes were available.

Now groups of (mostly) men keen to strip off and stretch together are growing in many of the European capitals. There are regular sessions in the larger North American and Australian urban centres and outposts in Argentina and Brazil.

There is even a city in Asia where men are breaching rigidly held and enforced cultural norms to get together and share their nude downward-facing dogs and tree poses.

Naked yoga allows a generation of tech addicts to reconnect

It would be easy to dismiss this as a manifestation of ever more sexualised gay lives. But the motivations that are driving the blossoming of naked yoga sessions and encouraging ‘skyclad’ men on to their mats on a regular basis appear to have little to do with sex.

It’s noticeable how many naked yoga teachers follow up their sessions with a group visit to a local restaurant, bar or coffee shop. This not only contextualises classes ‘in the real world’ but casts the teacher in the role of community-builder too.

‘On Friday evenings I go out to eat after class and I invite anyone who wants to join me,’ says Todd Jost, teacher of up to three classes a week at Naked Yoga Miami.

‘A lot of people will come to that class [specifically] so that they can socialize with this community of men.

‘In general, we aren’t connecting with one another. In our technological world we have all the apps where you can hook up and have sex and then be done… and you go home and you’re isolated and it’s like “OK, well what was that about?”

‘And you see people out at a social gathering and nine out of 10 people have their noses in their phones. They’re not even looking at the people that are next to them or in the same room.

‘So, if we attend yoga and get into that mindset we can carry it into a social environment. It redevelops our social skills in a way that technology doesn’t allow us to do.’

His sentiments are echoed by George (not his real name).

He runs up to three classes a week in an Asian city where social nudity is a rigid taboo. In fact residents feel they daren’t wander around naked in their own home with the blinds open for fear that their neighbours might report them to the authorities.

He and his students feel the pull of yoga in the buff so strongly that they risk fines, imprisonment, corporal punishment and even deportation in order to enjoy their practice.

‘I try to build community,’ he explains. ‘So after every class I’ll serve lemonade or fruit or something. I like that we can hang around naked and we’re just comfortable. I offer these guys an outlet to be together naked in a non-sexual atmosphere.’

Unsurprisingly, homosexuality is still illegal in his city. So his classes offer an opportunity for gay men to mix but are also vested with a flavour of liberation.

‘Everyone comes for their own reason. Most of them want to shed that layer of not being comfortable in their own skin. To honour “this is what I have, this is who I am and this is it”. A lot want to try to get over that hump.’

Freedom is a word that pops up frequently in association with naked yoga.

It’s as if, as well as freeing themselves from the confines of clothing, the yogis feel released from the obligation to present to the world different images of themselves: the professional carapace they lug around at work, the top/versatile/bottom sex-dater, the family member etc.

Their stripped-down yoga practice offers them the opportunity to connect more fully with themselves. And by doing so they take a break from, for example, their self-created sometime image as the body-beautiful gym bunny.

‘I specifically don’t focus on a workout-style class,’ says Jost. ‘I feel there are plenty of classes out there at gyms and yoga studios that do that.

‘Social media and it’s in-your-face, perfect-body type of thing leads people to be always striving to get towards that. That’s great but I think yoga is so much more than that and what resonates is the meditative and self-reflexive aspects and finding way for personal growth.’

So the men are free from the pressure to rep, weight-lift and cardio themselves towards media-defined, idealised images of perfect body shape.

And naked yogis also appear to use their in-the-altogether sessions to allow themselves to find connections with their classmates that they can’t risk in other aspects of their lives.

For example, where once colleagues might also have been friends, professional culture can get in the way.

‘In some cases, the workplace is not [any longer] an environment to develop friendships,’ adds Jost. ‘I imagine in the corporate world that it’s very much either “I’m going up the ladder or you are” and if you become too friendly it becomes awkward.’

‘They love to touch each other’

Letting go of these burdens can even extend to something as simple as non-sexual touch. Many naked yoga teachers include paired/partnered poses in their practices.

‘They love to touch each other,’ says Frank Morgan of the men who attend his Thursday evening sessions. He leads an hour of yoga followed by an hour of paired work.

‘In the partner stretching they get to touch and hug each other but not in a way that leads to sex because it’s about having respect for everybody else and keeping it a safe space. They get very disappointed if the partner session doesn’t happen.’

Morgan is based in Palm Beach, a suburb of Gold Coast in Australia. And he says, the stereotype of the ultra-body-conscious Aussie bloke holds no currency for his students.

‘Mine is not a “body beautiful” class. What I teach is about body awareness and how to use your body in a better way. But the basic thing is that they just want to come along and hang out with men naked.’

Ultimately, there are many reasons that can help explain the remarkable expansion of men’s Naked Yoga around the globe but it would be wrong to regard it as a frivolous fad.

It is meeting a range of complex needs but, in a world that for many seems to be increasingly complicated, it’s doing so with an appealing simplicity. Men. Together. Naked.

MyGayGetaway.com comment: If you like nude male yoga or are interested in participating in a fun, relaxed and positive environment please check out our featured property Frog Meadow Farm B&B. Owners Scott & Dave host an array of tantric and naked weekend classes at their all male Bed & Breakfast in Newfane, Vermont, USA! Scott & Dave are excellent B&B hosts and we fully recommend their property. 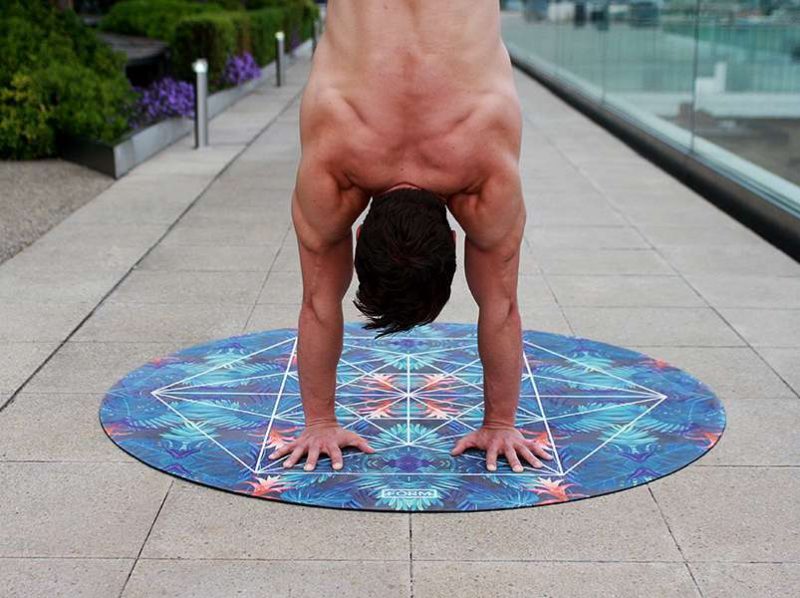 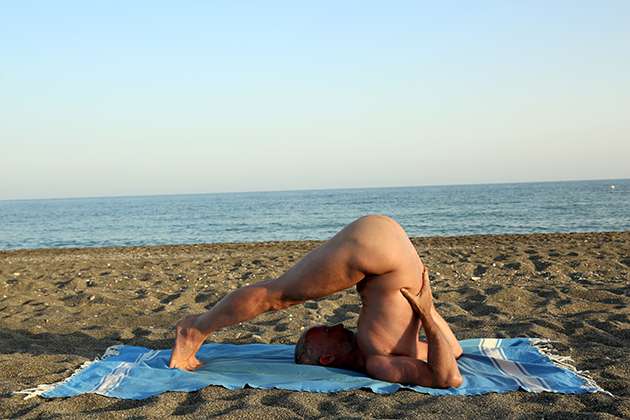 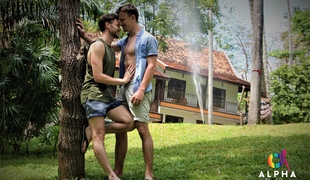 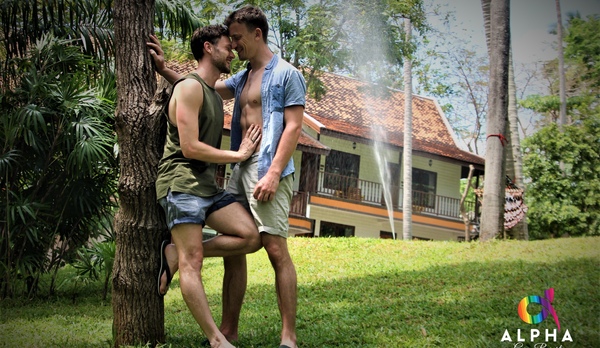 Alpha Gay Resort is the largest gay resort in Thailand and first ever on Samui Island exclusive for adult gay men only. Alpha’s unique resort is positioned on 6,400 square meters of land securely surrounded by high bamboo fencing offering absolute privacy. Beautiful lush established greenery and massive native trees are integrated into the architecture. The 30 newly built modern edgy rooms and villas will provide guests a getaway from busy city life to unwind, rejuvenate, be free, fall in love and of course enjoy the freedom to marry. The exteriors of the buildings and the landscape have been totally revamped and upgraded transforming the property into a tropical paradise. 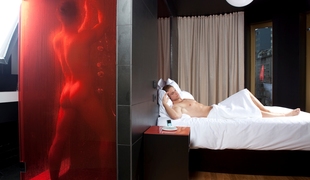 Berlin is calling for you to come experience a gay getaway in cosmopolitan Berlin. Heterofriendly hotel Axel is the perfect destination to come and in pack your bags and let the fun begin! 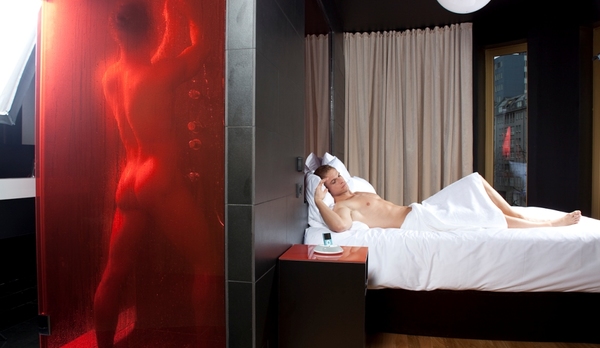 Berlin is calling for you to come experience a gay getaway in cosmopolitan Berlin. Heterofriendly hotel Axel is the perfect destination to come and in pack your bags and let the fun begin!

Warmth, design, music, trends... to see and to be seen. This is what defines the Axel Hotels style.

A cosmopolitan city like Berlin, brings you the opportunity to enjoy the culture: History, festivals and a bunch of amazing activities.

Start your perfect day at Axel Wellness, with its water areas, fitness and relax.

Berlin is one of the most exciting capitals in Europe: a city to discover. History, lots of fun at night, cool people and freedom are some of the features that make this town so magical.

Axel Hotel Berlin is located in the heart of Schöneberg, the most famous zone of Berlin's gay scene; one of the best shopping and entertainment district.

The pleasant atmosphere of Axel Hotel Berlin is waiting for you!